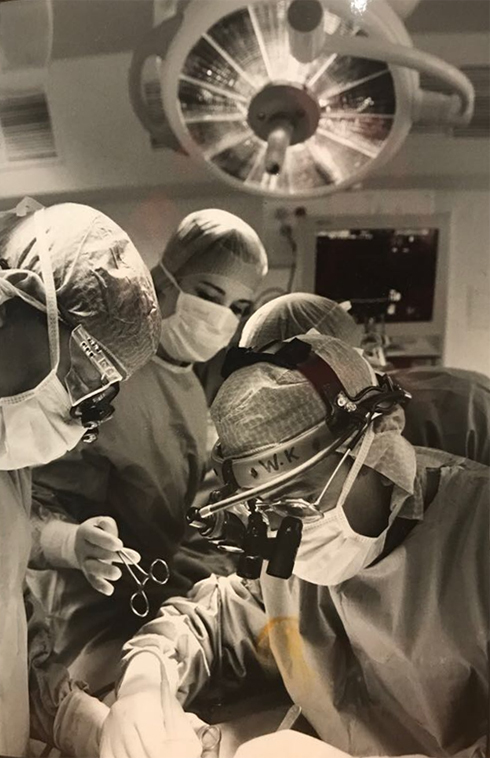 Master of Medical Sciences – 1990
Delivered by the French Ministry of National Education.

US Patent for a surgical instrument – 2017
Detection means instrument

1990
– Member of French College of Thoracic
and Cardio-vascular Surgery

1992
– Member of the French Federation of Cardiology

1992
– Member of the French Society of Cardiology

IMVCO – 1999
– Member of the Institute of Western Cardiovascular Diseases

September 1983 : Qualification in General Surgery (obtention of the C.U.).

May 1983 – September 1984 :
Senior resident in the Department of Thoracic and Cardiovascular Surgery
of Pr. J.Y. NEVEUX
Laënnec Hospital – Necker University

Between 1989 and 2000 at Laënnec Hospital and Necker Enfants Malades.

Full-time for adults and children
Participation in the heart and heart/lung transplant program and provide heart transplant treatments.
Strains of cardiac grafts

Use of cryopreserved homografts
Consultant at Cryolife – Atlanta, and creation with them a tissues bank

Use of pedicled autologous pericardium.

Algers (Algeria) – since July 2018
Since 2018, regular missions to the Chahrazed clinic in Algiers.

Damascus (Syria) – May 1995
Medical and surgical mission, at the invitation of Professor S.Kabani,Head of the Cardiac Surgery Center of the University Hospital of Damascus, and the organization by the Franco – Syrian Medical Association (AMFS), (with Professor Leca, Dr. Haydar Intensifier) .
– Conferences.
– Visits of the different centers.
– Consultations (children with complex congenital heart disease).
– Participation in the operating program.
– Meeting of two ministers (health and national education).

Subsequently, a twinning contract was signed with Dr Sukar, director of the Basel Assad Cardiological Institute in Damascus.

Dhahran (Saudi Arabia) – November 1992.
Collaboration contract between the KFMMC of Dhahran (Military Hospital) and Necker CHU – Sick Children (program led by Professor EVEN),
A cardiological symposium was organized:
The main purpose of this trip was the on-site study of an equipment project for a cardiac surgery center: evaluation of local possibilities (architecture, budget, recruitment).
A comprehensive study report was then provided to Professor EVEN and Saudi local authorities.
In this project Laenecec’s cardiac surgery department took care of the medical and surgical part; to know :
– Recruitment of medical and paramedical personnel.
– Staff training on site and in Laënnec.
– A rotation of surgeons to operate and train the surgical team on site.
– Missions three or four times a year.
– Receive at Laennec hospital complex congenital heart disease.
This project has been postponed due to budgetary problems.

Oran (Algeria) – October 1992.
Information day as part of the scientific collaboration between Professor Leca’s cardiac surgery department, Laennec Hospital in Paris and Professor Iles’s cardiology department, CHU Oran:
– Conferences on homografts.
– Consultations and follow-ups of children who have had homografting sites.
– Consultations and follow-up of children operated on a mitral plasty and aortic valve replacement.

Madrid (Spain) – March 1992.
Organization of a conference and a one-day workshop by the Cryolife-Mediset laboratories and Spanish cardiologists and surgeons for the use of cryopreserved homograft.

For any request to Professor Wassim Khoury, please use the following contact form.